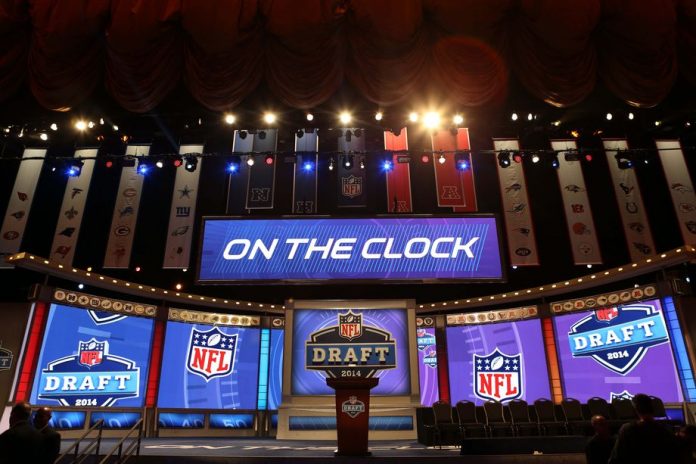 With the Super Bowl just a few days away, it’s time for us here at NFL Draft Lounge to look ahead to the 2019 NFL Draft in Nashville. With the Senior Bowl now behind us, we’re in the thick of the process and before we know it, we’ll be covering Draft Day. Our 2019 NFL mock draft below breaks down the first round of the 2019 NFL Draft as we predict where each team might look for talent in April.

Kliff Kingsbury was hired as head coach to revamp the Cardinals offense and develop QB Josh Rosen. But first, he has an opportunity to draft the best available prospect in EDGE rusher Nick Bosa, who will be able to come in and start from day one.

I have Josh Allen as the best overall Outside Linebacker on my draft board. Allen plays with high awareness, is able to hold his own out in coverage, or can be used to rush the passer and disrupt the pocket.

New head coach Adam Gase inherited a team with several building blocks, such as QB Sam Darnold, but the Jets are also a team with massive holes. The Jets and Gase are in the perfect position to bring in one of the top defensive prospects for Gregg Williams’ new defense.

The Raiders have needs at nearly every position. They traded away Khalil Mack and Amari Cooper for a slew of draft picks. I have the defensive trend continuing here with Rashan Gary coming off the board.

I’m assuming that Bruce Arians wants to come in and work with QB Jameis Winston for at least a year. That being said, this is the first opportunity, barring a trade, where I wouldn’t be surprised to see a quarterback come off the board. Instead, I’ll give the Bucs one of the best defensive backs in this draft class.

I know that the pick SHOULD be quarterback here, but hear me out on this one. The Giants valued Saquon Barkley over the QB draft class last season, which, in my opinion, is much better than this year’s class. Jawaan Taylor was an anchor for Florida, albeit at right tackle, but will be much needed for an unimpressive offensive line.

The Blake Bortles experiment in Jacksonville has officially failed. I think the rest of the draft class might have a higher ceiling, but for me, Lock is the safest pick. The Jaguars need a signal caller that can play consistently, and while one of the potential free agents might be the best option, that’s not my style in these mock drafts.

I still think that the Lions needs to find a top wideout to fill the role left by Calvin Johnson’s retirement following the 2015 season. However, the Lions have, and could potentially, lose key pass rushers. I was pretty high on Sweat heading into the Senior Bowl, where he balled out and likely earned himself quite a bit of money.

Josh Allen appears to be the long-term answer for the Bills at quarterback. I’ll give them some much needed help on the offensive line here. I think Jonah Williams might benefit from a switch to right tackle or guard, so look for the Bills to utilize that.

When the Broncos were most successful recently, they had an elite defense. Look for new head coach Vic Fangio to get back to those roots and elect to go defense with this pick. I’m not entirely sure where Ed Oliver will fit into an NFL defensive line, but he’s a top level talent.

Devin White is my top rated inside linebacker on my draft board. He’s an above average tackler in the open field, and can certainly hold his own in pass coverage or when rushing the passer. This is another spot where the surprise pick could be quarterback, depending on how the selections shake out.

The Packers can go in several different directions here, so i gave them my best available prospect. I’m a big fan of what Clelin Ferrell’s abilities as a pass rusher. He’s an intelligent and patient prospect that should fit well into Mike Pettine’s defense.

I’m not as high on Haskins as others are, but I do believe that the Dolphins could be a great fit. The Dolphins have a potential out on the Ryan Tannehill contract, which they’ll likely take. This gives them the opportunity to bring in a veteran quarterback for a year or two while they develop Haskins.

Ford played at right tackle for the Sooners, but would benefit greatly from a move to guard. The Falcons have to play more consistent football in 2019, which starts with giving Matt Ryan more time in the pocket.

Alex Smith is likely to miss all of the 2019 season after suffering a terrible leg injury. Washington’s best option is to bring in one of the available free agent quarterbacks, but also need to find a viable replacement before their window closes. Daniel Jones doesn’t have spectacular game film, but he has the prototypical size and mechanics that would be the perfect project for head coach Jay Gruden.

I had Polite mocked to the Panthers before Julius Peppers’ announced his retirement, which just solidified the need for an EDGE rusher. Polite was one of my favorite rushers to scout, and his stock should be on the rise as we get closer to April.

The Browns drafted Denzel Ward with the 4th overall pick in 2018. I’m giving them another cornerback here to make much needed improvements to their secondary.

The Vikings have all the weapons on offense to make a push for the playoffs, but have to find consistency. I’m giving them some depth on the offensive line to give Kirk Cousins the time he needs to get rid of the ball.

With the AFC South improving, the Titans are going to need to find a prolific wide receiver for Marcus Mariota. Metcalf is listed as the top wideout on my board, but don’t be surprised if we see a tight end off the board here instead.

The Steelers are eventually going to have to find a suitable replacement for QB Ben Roethlisberger. However, they aren’t getting any younger at corner. I’m not exceptionally high on Baker, but he should have a few years to develop before he’s asked to do too much.

When the Seahawks were at their best, they had one of the most effective defenses in the league. Since then, they’ve had to make tough decisions in letting their defensive stars go. Drafting a prospect like Thompson here will give them the talent they desperately need.

I don’t know how much longer Lamar Jackson is going to be able to play at such a high level before defenses start to figure him out, but adding a weapon or two for him in this draft class should be a priority.

It’s time for the Texans to finally address their offensive line woes. For them to find long-term success, they’ll need to keep quarterback DeShaun Watson upright and healthy.

As I mentioned before, I don’t know if Derek Carr is the quarterback that Jon Gruden envisions being there in three years. However, he’s going to have to find offensive weapons in this draft class, which could start with a stud at running back.

The Eagles must find consistent play on offense to make their way back to the playoffs. But games are also won and lost in the trenches. Dexter Lawrence is a versatile D-Line monster that can be used in a variety of ways.

General Manager Chris Ballard hit a homer in with OG Quenton Nelson in 2018. This year, I wouldn’t be surprised to see them draft an EDGE rusher.

At 6’4, the Raiders could find a solid red zone target with N’Keal Harry. I’d like to see him develop a bit more, but he’s certainly someone that Jon Gruden can work with.

Simmons isn’t invited to the NFL Combine due to a domestic violence incident in 2016. However, he’s one of the top defensive tackles in this draft class. Adding depth on the interior defensive line will be key for their pass rush to be successful.

The Chiefs were still able to move the ball well after releasing Kareem Hunt. They’ll still need to find a replacement for him in the long run, but their defense was atrocious this season.

Depending on how the draft shakes out to this point, a receiver or tight end is a possibility here. Instead, I’m mocking them one of the top safeties in a class that lacks deep talent.

The Rams have a talented team on both sides of the ball. That being said, there’s going to be a point where decisions will have to be made on contracts. Brian Burns isn’t a polished pass rusher, but he plays with a high-motor and has a knack for finding the ball.

Rob Gronkowski is still one of the best tight ends in the game, but talk of his retirement has creeped up in the last few seasons. T.J. Hockenson is a pro-ready prospect that can step in and contribute at a high-level in all aspects of the position.

The coronavirus has wreaked havoc on all sports, the NFL included. Games, and entire seasons, were cancelled or postponed....
Read more
NFL Draft