Kentucky's Lynn Bowden Jr. is one of the most unique playmakers across the SEC, and entire country. This past weekend, he took a place under center for the first time since senior year. 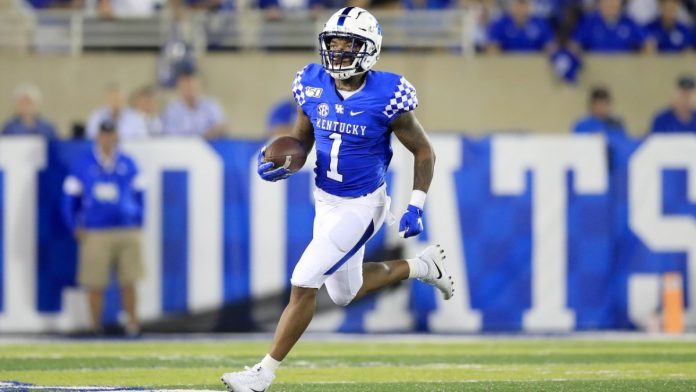 While scrolling for miscellaneous box scores from this week’s slate of games, you may not be familiar with the leading passer of the Kentucky Wildcats during their 24-20 victory over the University of Arkansas.

That is most likely due to the fact that that quarterback has nearly six times as many receptions (116) during his time as a Wildcat as pass attempts (21).

The other most likely reason you didn’t recognize the name of quarterback Lynn Bowden Jr., is because Bowden is more well known as Kentucky’s leading receiver, and most dynamic playmaker offensively.

With starting quarterback Terry Wilson and third string, freshman quarterback Nik Skalzo already lost to the season with separate knee injuries, the Wildcats opted to give Sawyer Smith a week of rest in hopes to recover further from ailing wrist and shoulder injuries.

That marked an opportunity for Bowden, who was once a dynamic high school quarterback in his own right, a very unique opportunity.

An opportunity that Bowden would make the absolute most of, to the tune of 24 rushes for 196 yards and 2 touchdowns (to go along with completed 7 of 11 passes for 78 yards and another score).

Get you a QB who can run and throw (and field punts). @LynnBowden_1 #WeAreUK #BringIt pic.twitter.com/HWpQkcGMfd

This, of course, was Bowden’s first time under center since his senior year or high school at Warren Harding in Youngstown, Ohio.

While at Warren Harding, Bowden solidifies himself as one of the dominant dual threat quarterbacks in Ohio history. During his final year under center, he would throw for 1,366 yards and rush 2,277 yards, while accounting for 57 total touchdowns on the season.

That would lead to a second place finish in the 2016 Mr. Football award in Ohio, behind University of Cincinnati star running back Michael Warren II.

That would be a huge boost for Bowden as he established himself as one of the greatest plays makers in state history, finishing sixth all time in rushing yards with 7,387 yards along with 91 total touchdowns, putting him tenth on the list. For good measure, Bowden would cement his high school dominance by also starring on the hardwood, averaging 24 points per game, 6 rebounds and 7 assists as a senior.

While Kentucky football is not often confused with the recruiting hotbed, specifically for a top ranked athlete out of the state of Ohio, SEC football was soon to be in the future for this 6’1” 199 pound playmaker.

Bowden would choose that opportunity to play at the University of Kentucky over the likes of Penn State, Indiana, Michigan, Michigan State and Nebraska. Listed as a four star recruit by every major recruiting service, regarded as a top 100 recruit by both Scout and ESPN in the 2017 cycle, the only question was what position would fit best for the fifth ranked athlete recruit according to 247Sports.

Bowden would quickly assert himself into the action during his true freshman season, giving the rest of the SEC some flashes into what would come in the future. That season included a modest 17 receptions for 210 yards, but would make enough of an impression to capture a place amongst the best freshman in the conference, while also becoming a big threat as the team’s main kick returner.

2018, his sophomore season, would serve as a big breakout season for Bowden, pacing the team with 62 receptions for 728 yards and 5 touchdowns. That season would see the aptly nicknamed “Six” become one of the biggest offensive weapons across the entire conference.

His ability to make plays both inside and outside speak volumes to his perceived versatility coming out of Warren Harding, coupled with his work on special teams. The team’s matchup against Arkansas presented a new opportunity for Bowden to tap into his past, and show off his ability at the quarterback position.

It was no surprise that the team relied on Bowden’s athleticism in his spot duty, running a tone of zone read concepts to always accentuate his ability to pull and run. That worked to the tune of nearly 200 yards.

While his ball had a noticeable flutter, his ball placement and decision making were pretty consistent throughout. That intelligence shows up big time in his play at the wide receiver position.

Bowden is a player who understands the development, and advantages against zone coverage. He routinely sits down properly, fitting in perfectly as a fit in the slot. Against man coverage, he is no slouch either. He is more short area explosive than blazing fast, but he also shows a nice ability to attack leverage at the top of his stem. This helps for him to create instant separation out of his breaks.

And while this type of performance might grasp the attention of the average fan for uniqueness of the opportunity, what should captivating is the overall bigger picture of quality Bowden demonstrates as a football player.

He is again pacing the Wildcats in receiving this season with 37 receptions for 477 yards and one touchdown, despite his one game venture at quarterback. While being just a true junior, and potentially apart of a historically great wide receiver group if he declares, Bowden deserves a lot more publicity than what he is currently receiving. I have an early comparison for him to current Denver Broncos wide receiver Emmanuel Sanders. For now, the team’s quarterback situation stands as a threat for Bowden’s national notoriety.

This begs the question, is there any chance Bowden can throw the ball to himself going forward?

The Reese's Senior Bowl is the biggest of the college football post-season all-star games. And the 2020 Senior Bowl provided a platform for a number...
Read more