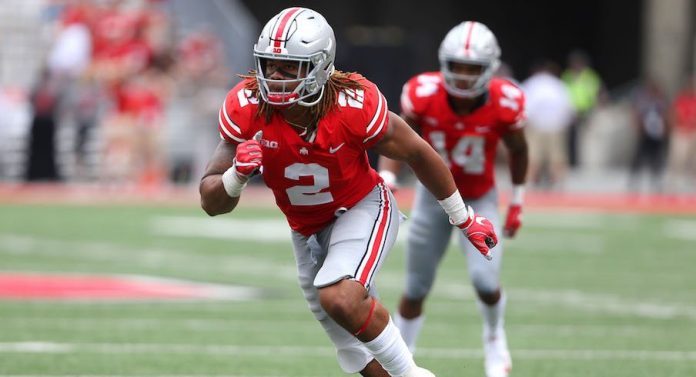 Chase Young is a standout EDGE rusher for the Ohio State Buckeyes.  Young has consistently made plays for the Buckeyes and is considered by many to be the next best defensive end after Nick Bosa. In this scouting report, we’ll breakdown Chase Young and evaluate his NFL future.

I absolutely love the effort from Chase Young on this play, but this is also a great example of what Young brings to the table as an NFL Draft prospect.  He’s an explosive player off the line of scrimmage, has an excellent use of hands to shed blocks and provide leverage, keys and attacks the ball, and displays an excellent high motor to stay engaged on the quarterback.  This is still early in a game against inferior talent, but nonetheless it’s an excellent effort.

If I have to find a flaw in Chase Young’s game, it’s his ability to process RPO and attack the ball carrier quickly.  On this play, a key 4th and 1, Young misdiagnoses the ball carrier and Cincinnati gets a new set of downs.  While Young won’t face as much RPO at the next level, the NFL is a copycat league and several teams have started to use the read-option much more often.

Pass Rush Off The Edge

Once again, Chase Young puts on a clinic in this clip.  The offensive line is no match, even with additional linemen in the formation, as Young uses his speed and hand placement to shed the block and rush off the edge.  Young is able to stretch his body and strip the ball from the Quarterback, allowing his teammates to recover the fumble.

Features an adequate ability to diagnose and process read-option.  Often finds himself out of position and must rely on his athletic ability to make plays.  Could struggle early in the NFL as teams run more zone read.

Chase Young is arguable the best overall prospect in this draft class.  Barring an injury, I’d be willing to bet that Young will come off the board within the first couple of picks.  I have him listed as a true defensive end, but there may be some teams that could look at him as an outside linebacker in a 3-4 defensive scheme.

Small School Studs: Will Elerson Smith Be an Impactful Player in the NFL?

For today’s scouting report we have a small school stud to bring to you. Elerson Smith is a pass rusher out of the FCS...
Read more