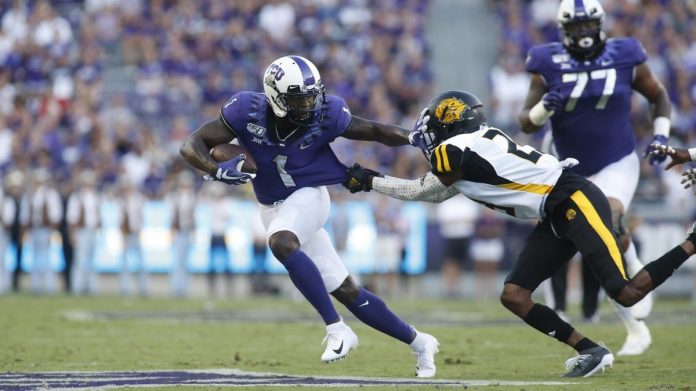 Jalen Reagor is a two-year productive receiver for TCU.  Was a consensus four-star recruiting prospect out of high school.  Primarily plays the right outside receiver position.  In this article, we’ll breakdown his mechanics and evaluate his future and an NFL wide receiver prospect.

Route Running Ability Outside The Numbers

This is an NFL Caliber effort from Jalen Reagor on this play.  Reagor shows good acceleration off the line of scrimmage, forcing the defender to give some cushion to avoid the deep threat.  Reagor sticks his foot in the ground and runs a comeback along the sidelines.  After the catch, Reagor displays nice footwork to gain a couple extra yards on the play.

Jalen Reagor does everything right on this play, except for securing the ball.  He shows off his route running ability and manipulation of the defender to create space throughout the stem of the route.  Reagor has a step on the defender, giving the quarterback room to spot the ball.  The defender makes a nice play on the ball once it’s in Reagor’s hands, but I would like to see Reagor get both hands on the ball and secure it more consistently.

Footwork Throughout Stem and Separation Quickness

This is a heck of an effort from jalen Reagor on this play.  The defender has to respect Reagor’s top end speed with a decent cushion on this play.  Once Reagor cuts inside and gets the defender to rotate his hips, he cuts back outside and creates excellent space at the top of the route.  It’s plays like this that will keep Jalen Reagor in the NFL for a long time.

Jalen Reagor is a tad undersized for the outside receiver position, but could develop into a deep threat from the slot position.  Moving to the slot would also allow him to work on his blocking ability while still contributing on the field in other situations.  Look for him to come off the board to a team late in the first if we see a run on wide receivers, but shouldn’t slip past the middle of the second round.