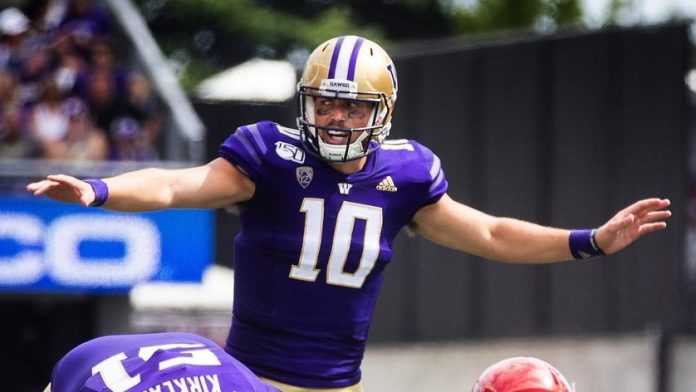 Jacob Eason was a five-star recruit that originally signed with the University of Georgia.  Eason was a starter in 2016 before losing his starting job to Jake Fromm after an injury in 2017.  Decided to transfer to University of Washington and sit out the 2018 season.  Became the starting quarterback in 2019.  In this scouting report, we’ll breakdown Jacob Eason and evaluate his NFL future.

Jacob Eason has a good ability to throw accurate passes and with good anticipation, which is highlighted extremely well on this play.  Eason reads the field quickly, sets his feet, and delivers a strike to the receiver crossing the field for a touchdown.  Jacob Eason has an NFL-caiber arm and displays that on this play.

Breakdown Of Mechanics Under Pressure

When the pocket is collapsing, Jacob Eason has a habit of double clutching the ball and making poor decisions.  On this play, Eason makes a read on the slant route, but second guesses and then double clutches his ball and fails to set his feet properly, which results in an inaccurate throw.

Accuracy On Deep Routes Outside The Numbers

Washington’s game versus Cal was a rough one, but aside from that, I’ve seen some improvement in deep routes along the sidelines.  On this play, the receiver does a fantastic job of holding the red line and providing Eason a throwing cushion along the sidelines, which Eason takes advantage of to deliver a beautiful pass with terrific placement where only the receiver can make a play.

Jacob Eason was a five-star recruit that started for the University of Georgia until losing his starting role due to an injury.  Has prototypical size and framework for the position.  Has a very good range to handle bad snaps.  Displays solid athletic ability to pickup yards outside of the pocket.  He won’t burn defenders, but can change direction quickly and fight for additional yards.  Has a good ability to scan the field and make quick reads downfield, but also shows a good ability to settle for what the defense gives him and hit his checkdown.  Has a very good ability to set his feet quickly and gets the ball out just as fast.  Very good accuracy on screens and passes in the flats.  Good ability to throw with anticipation on crossing routes.  Uses his solid athletic ability to execute bootlegs and play action.  Squares his body on bootlegs and delivers accurate passes.  Does a very good job of identifying pressure and can pickup free rushers quickly.  Features an NFL-caliber arm to make throws along the sidelines or downfield outside of the numbers.

Needs to develop ability to take some heat off throws in the short to intermediate games.  Has a tendency to panic when pocket is collapsing and throw with poor footwork.

Jacob Eason is a good quarterback prospect that has a solid future in the NFL.  Eason is a strong arm quarterback that works best from the pocket, but can make plays outside of the pocket as well.  Will need a good offensive line and a solid running game to compliment his skillset.  Should rise up boards as the season progresses, but will shine during NFL Combine and Pro Day.

Nestled in the middle of the State of Iowa lies the city of Ames, home of the...
Read more
NFL Draft

Amid the uncertainty of what the Coronavirus holds, we'd be remiss if we didn't take a closer look at football. The 2021...
Read more
2020 Summer Scouting

The University of Cincinnati hasn't had a quarterback selected in the NFL Draft since Tony Pike was chosen in the sixth round...
Read more
Prospect Spotlight

The 2020 College Football season is just a few short months away. If the NCAA is able to successfully protect it's student...
Read more

Amid the uncertainty of what the Coronavirus holds, we'd be remiss if we didn't take a closer look at football. The 2021...
Read more

The University of Cincinnati hasn't had a quarterback selected in the NFL Draft since Tony Pike was chosen in the sixth round...
Read more