5 Senior Prospects That Could Rise Up Draft Boards in 2020 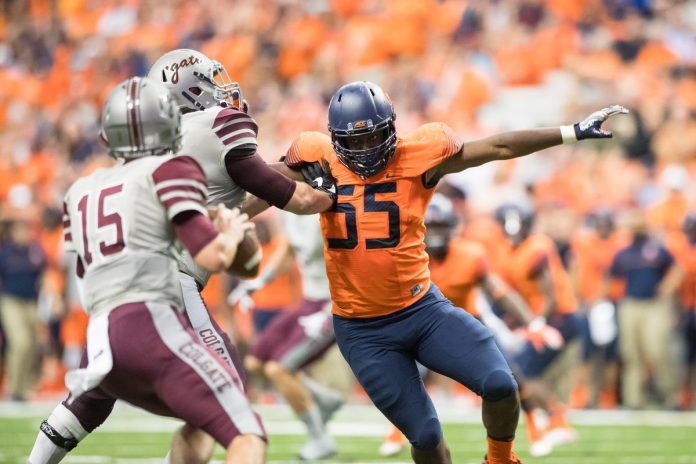 For NFL prospects, senior seasons are a player’s last chance to make an impression with NFL teams. While not every prospect will take advantage of their last collegiate season, plenty of prospects will take advantage of their senior seasons and see their draft stock soar. While plenty can and will change between now and the 2020 draft, these are five seniors that could find themselves on the rise.

Coming off a lost season due to a lingering injury, Jace Whittaker enters the 2019-20 season with something to prove. Entering last season, Whittaker had some hype as a potential mid-round pick. As of right now, Whittaker is probably seen as a late-round prospect at best, but the potential is there for a rise up draft boards. There have been flashes of ball-hawking talent, and by all reports, he is an excellent locker room presence. With a good season, Whittaker should once again find himself as an early day-three prospect.

When scouting potential players, NFL teams love to see guys who have improved each year in college and Tennessee receiver Marquez Callaway has done just that. The production hasn’t been off-the-charts, but he has become a go-to target for the Vols, and amidst some shaky quarterback play, he has actually done well in a tough situation.

With all that said, Callaway has some pretty major flaws as far as route-running is concerned, and his hands can be inconsistent. Callaway is actually reminiscent of former Tennessee playmaker Cordarrelle Patterson, and though he won’t go in the first round like Patterson, a good final college season could help his draft stock skyrocket.

Benito Jones is a guy that I am very excited about going into the upcoming season. After dealing with injuries over the past few seasons, Jones has remained productive. That said, if he’s fully healthy, there’s no telling how good Jones could be with his explosive first step and natural pocket-pushing talent. Injuries are a concern, but a healthy Jones is an exciting prospect.

As a former cornerback that is making the move to safety, the potential is there for Julian Blackmon to show out in a big way this season. Safeties with the ability to hold up in coverage are some of the most important players in the NFL today and Blackmon’s experience as a corner showed his ability to mirror receivers at an above-average level. In the long-term Blackmon needs to bulk up and improve in the run game, but I expect a strong season for the new Utah free safety and as a result, a rise up draft boards come draft time.

As arguably the most productive player on this list, Kendall Coleman is criminally underrated as a prospect. No, he won’t wow anyone with explosive athleticism but Coleman just gets it done. If you want a guy that is going to go out and do his job on every play and end every season with right around eight sacks then look no further. No, he’s not exciting, but expect NFL teams to covet his reliability and value him accordingly.

The Reese's Senior Bowl is the biggest of the college football post-season all-star games. And the 2020 Senior Bowl provided a platform for a number...
Read more