Brian Burns: The First Round Prospect No One Talks About 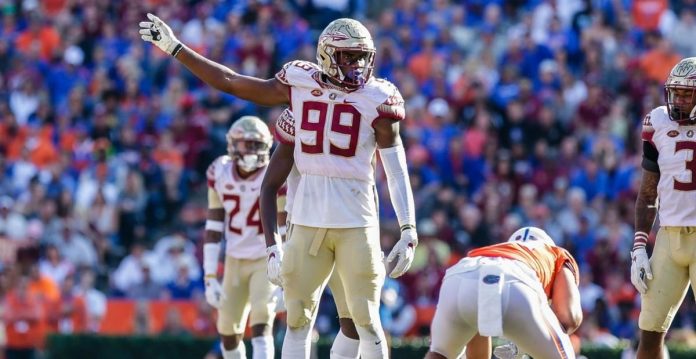 All year long we’ve been hearing about the talent at the top of this year’s edge class. We know about Nick Bosa, Josh Allen, Rashan Gary and Clelin Ferrell. However, there’s one player who is better than most other edge players in this class, Brian Burns. Brian Burns is the star edge rusher from Florida State; he’s got the athleticism and traits you desire in a pass rusher, but for some reason, he doesn’t get any attention. Burns weighed in at 250-pounds at the combine, but for some reason, people still question his weight. He’s produced on tape and shown desirable traits, but people still keep him low on their boards. Brian Burns has some of the best tape in this class, so let’s preview some of it.

In the play above, Burns is circled on your screen as a stand-up pass rusher, which is where he projects best to the next level. This play is a masterpiece from Burns. When the ball is snapped you can see Burns stay low so he can keep leverage for his rush. As he approaches the offensive tackle, he extends his left arm towards the opposite shoulder of the blocker, acting as if he is going to use power to use a long arm and push the blocker out of the way. After he sees the blocker try to keep that arm from hitting his shoulder by trying to push it away, Burns drops his arm, ducks his shoulder and rapidly spins past the blocker. The play doesn’t end there, however. Once Burns gets past the blocker, he shows enough bend and change of direction skills to keep his balance and get to the quarterback. It takes an incredibly smart, experienced pass rusher to bait a blocker like that and the counter with a spin move. Burns shows elite moves here, moves of a top 5 player.

This is what we folks in the draft community like to call bend. Burns is quick off the snap and is quick to diagnose what the offensive tackle is giving him. He sees the blocker is acting tentative and is waiting back for Burns to make a move; he sees this and attacks him with speed. Burns’ speed rush doesn’t give the offensive tackle any time to react and is able to catch him slacking. Once Burns meets the blocker at the point of attack, he jumps to his outside should, dips down, bends and turns the corner. The offensive tackle is left grasping at straws as he watches Burns blow past him and swat the ball out of his quarterbacks’s hand. The quick decision Burns makes when he’s approaching a blocker is incredible. He gets off of the line quickly, analyzes his options and strikes, and most of the time, he wins.

This play is a bit different from the rest, but it’s more predictive of Burns’ role in the NFL. His best projection is a 3-4 outside linebacker, and if that’s the case, he’ll be tasked to play as a stand-up linebacker at times. Burns does a great job of reading this play and diagnosing what he needs to do in order to bring down the ball carrier. Burns doesn’t hesitate to run straight for the running lane as the ball is snapped. He does a great job of reading the blockers and feeling out the flow of play. The running back hesitates for a second so he can find the hole, but it was a second too much; Burns shoots the gap and wraps up the legs of the running back. A major concern of Burns’ game among draft folk is his run defending; this play shows a great example of him defending the run to perfection. While the job of an edge rusher in the run game is to set and hold the edge, Burns will be asked to defend runs like this at the next level.

A year from now Brian Burns won’t care that he wasn’t talked about as much as other rusher, he probably doesn’t care now. When it’s all said and done we’ll be thinking of Burns as one of the best, if not the best, edge rusher from this years class. Guys like Nick Bosa, Rashan Gary, and Josh Allen get all the hype, but there’s a guy deserving of more hype than all of them, and it’s Brian Burns. It’s sad to see people ignore the sheer talent of Brian Burns, which is why he’s the first round prospect no one talks about.

Today, we will be continuing our look at every team’s 2020 NFL draft performance with the Cleveland Browns draft. The 2020 NFL Draft...
Read more

NFL Rookie of the Year Odds The 2020 NFL Draft stood as the most distinctive iteration of the event in the league’s long...
Read more