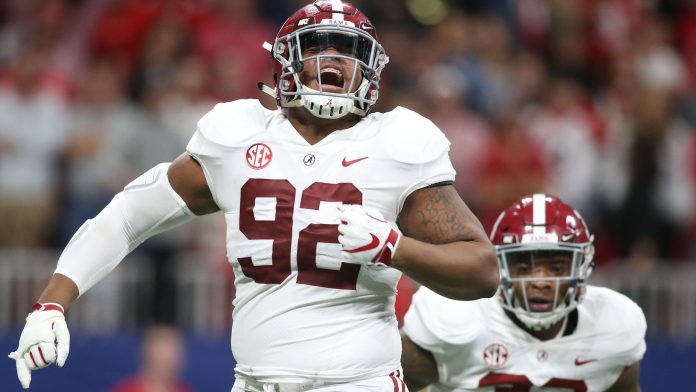 With the Super Bowl now complete, the draft order is officially set for the 2019 NFL Draft. I’ve had more time to breakdown film and have completed more scouting reports. It’s time to release my Mock Draft 2.0.

Personally, I think we can go ahead and write this one down in permanent marker. Nick Bosa is undoubtedly the most-talented prospect in this draft class. With Vance Joseph taking the Cardinals defense back to a 3-4 scheme, I think it’s solidified that Bosa is the first name called in April.

I have Josh Allen slated as more of an outside linebacker than a defensive end. That being said, I sill think he’s a great fit for the 49ers here. Allen is athletic enough to rush the passer, so it’s possible that he could become a defensive end.

I have Rashan Gary as my best overall true 4-3 defensive end. With Gregg Williams taking over the defense for the Jets, it’s a perfect pairing for New York. I still have a few concerns, but I’m also confident in Williams to shore those up with coaching.

The Raiders have holes at nearly every position within their franchise. Considering that Oakland isn’t going to be a ‘win now’ organization in 2019, I wouldn’t be surprised to see them trade out of this position and load up for 2020. Nonetheless, I think Quinnen Williams is a fantastic prospect that would certainly contribute immediately for the Raiders.

With Todd Bowles taking over the defensive coordinator duties for the Buccaneers in 2019, I’m going to mock them one of the best edge rushers in this draft class. Montez Sweat had a great showing at the Senior Bowl, and if he can couple that with an equally greta performance at the NFL Combine, this would be a steal for Tampa Bay.

As I said stated in my first mock draft, I’m not totally convinced that this pick is going to be a quarterback. Nate Solder wasn’t’ necessarily a success for New York, so I’ll give them my best available offensive lineman here. Jawaan Taylor played a lot of right tackle for the Gators, but I think he has the athleticism to play left tackle, even if it’s not right away.

I don’t believe that any quarterback in this 2019 draft is ‘pro-ready’ at this point, but I think Haskins has the highest ceiling. I still have some glaring accuracy concerns, but the Jaguars are going to have to take a chance on one of these prospects, albeit this year or in 2020.

The Lions could elect to draft an edge rusher here, such as Clelin Ferrell, but I think the opportunity for Matt Patricia to draft a shutdown corner here is more important. I’m a huge fan of Greedy Williams, who I’ve had as high as fourth in my mock drafts.

The Bills must find talented players to protect Josh Allen, who showed flashes that he could be their franchise quarterback. Cody Ford is a possibility here if the Bills have the need at interior offensive line ranked higher than a potential tackle.

The Broncos have tried and failed at finding their quarterback of the future several times. Daniel Jones has shown flashes at Duke that he could be a franchise quarterback. He has the ideal size and mechanics, but his game film at Duke isn’t spectacular.

It’s still unclear who will take over as defensive coordinator for the Bengals under new head coach Zac Taylor. That being said, the Bengals have a need at inside linebacker that they must fill sooner rather than later.

I believe that this is the first spot where we could realistically see our first tight end or wide receiver come off the board. Head coach Matt LaFleur will improve the offensive play calling, but finding Aaron Rodgers targets is an important need. With that said, I’m going to give them an edge rusher here. I have Ferrell ranked 4th on my Big Board, so let’s opt to go best player available instead.

Now that Kyler Murray has officially announced that he’s committed to the NFL, it’s time to take his draft stock seriously. I think the interview process at the NFL Combine is going to be huge for him. I can envision him being used similarly to how the Ravens used Lamar Jackson, although I think there’s a higher possibility of Kyler Murray struggling.

The Falcons can potentially lose both of their starting defensive tackles this offseason to free agency. With Ed Oliver still on the board here at 14, I think it’s a no-brainer for them to make this decision.

Alex Smith reportedly could potentially miss all of the 2019 season after suffering a gruesome leg injury. Rather than pick a quarterback here as an eventual successor, such as Missouri’s Drew Lock, I’ll opt to give them help on the interior offensive line.

I was torn between mocking the Panthers OT Andre Dillard or OLB Jachai Polite from Florida, or EDGE prospect Brian burns from Florida State. I eventually settled on Dillard here, but it could go either way when we get to April.

While many questioned it at the time, Denzel Ward played well enough for the Browns in his rookie year. It might be a bit unconventional, but I’ll opt to give them another defensive back this year, too. I’m pretty high on Byron Murphy, despite playing in a defense that isn’t suited for corners. I’d like to see him standout in position drills at the NFL Combine, but I feel confident enough to draft him here.

If the Vikings want to make it back to the playoffs in 2019, they’ll have to figure out their offensive struggles from this past season. With the exception of some offensive line depth, I don’t think drafting a player is the answer. Instead, I’ll give them the best available EDGE rusher in Jachai Polite.

In my first mock draft, I sent Ole Miss WR D.K. Metcalf to the Titans. I still think it’s a high possibility, but with two corners already off the board here, I don’t think they can afford to pass on Baker here, especially after going back through to watch more film.

Delonte Thompson is my top safety in this draft class. It seems like a natural fit to send him to a team like the Steelers. With that being said, Le’Veon Bell is out the door and Antonio Brown and Ben Roettlisberger might not be in Pittsburgh much longer either. In my opinion, it’s going to get worse before it gets better for the Steelers.

The Seahawks have lost a lot of talent on the defensive side of the ball the past few seasons. The Seahawks could elect to draft a safety here, but I think pass rush depth is a more pressing need for them here.

In my opinion, Lamar Jackson played better than most expected at the quarterback position. With that being said, now that defenses have some tape on him, Jackson will have to start moving the ball down the field through the air more. D.K. Metcalf is an exciting prospect that will stretch the field for the Ravens. If he’s still on the board, I’m sprinting to the podium to make this selection.

It’s going to be offensive line or cornerback for the Texans. With three corners already off the board, and a limited number of offensive lineman left, I have them drafting Greg Little from Ole Miss, who can step in and play tackle immediately.

Even though I have the Raiders drafting Quinnen Williams at 4, I still think it’s possible they can double up here. They could opt to go wide receiver here with someone like N’Keal Harry or Marquise Brown.

Josh Jacobs is one of my favorite prospects in this draft class. He’s not a flashy runner, but rather looks for contact and punishes defenders. He’s an excellent one-cut back that can make an immediate impact for the Eagles.

The Colts did very well last season with T.Y. Hilton and Eric Ebron. I’m mocking them additional help on the outside with N’Keal Harry, who I’m fairly high on, and someone that I think Frank Reich can work with.

First off, I don’t think it’s likely that Brian Burns makes it down this fat on the board, but I had a tough time finding a fit. I don’t believe that Burns is an equal replacement for Khalil Mack, although I don’t believe anyone else is either. I love the effort Burns displays and his relentless pursuit off the edge.

The Chargers have more pressing needs, but I think Jeffery Simmons is a possibility here, even with the torn ACL injury suffered during NFL Draft prep. I think it’s more likely that Simmons drops out of the first, but he’s also likely to be ready towards the start of the season. It’s a gamble for the Chargers, but could pay off huge.

I have Oruwariye as a second round prospect, but the Chiefs secondary was atrocious last season. They’ve got to get better in a hurry, even if that means stretching a bit for talent.

I might be higher on Rapp than most, but I think he plays with intensity and a high-level of awareness. It’s not a sexy pick, but rather a solid one for the Pack.

The Rams has a phenomenal season but are eventually going to lose defensive talent. I believe that Jaoylin Ferguson can step in and contribute in a limited role from day one, but can develop into a top-caliber player by year two or three.

Even if Rob Gronkowski doesn’t retire this offseason, it’s more likely to happen sooner rather than later. Hockenson is pro-ready and can do it all. He’s not going to be as productive in the passing game as someone like Noah Fant, but can block better than most.

The coronavirus has wreaked havoc on all sports, the NFL included. Games, and entire seasons, were cancelled or postponed....
Read more
NFL Draft