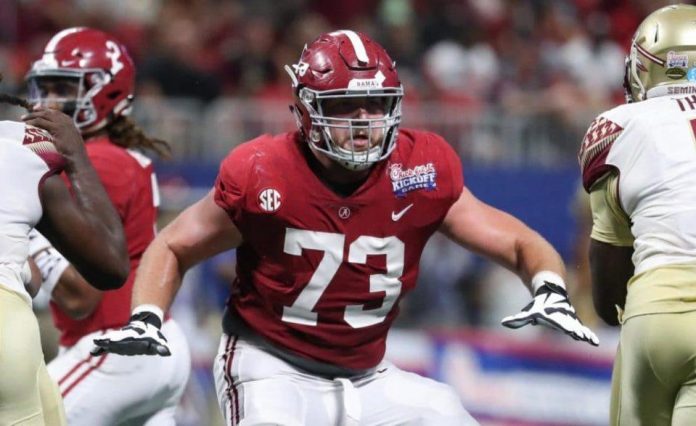 We’re in the thick of the NFL Draft season as the NFL Combine kicking off this week. We’ve seen a few teams already agree to a few deals, some players getting released, and more and more draft prospects finding their way into the rumor mill. It’s time for another mock draft!

The NFL Combine is going to be our first opportunity to see Nick Bosa since he announced that he would withdraw from school to focus on the NFL Draft after suffering an injury in October.  I believe that Nick Bosa has a firm grip on the first overall pick, and barring any setbacks, i’d put my money on his name being called first in April.

Aside from Nick Bosa, I think Josh Allen might be the most versatile pass rusher in this class.  I project him to play outside linebacker in the NFL, but his experience at defensive end is something that a team like the 49ers could look for.

In my last mock draft, I had the Jets taking Michigan DE Rashan Gary.  With this mock draft being so close to the NFL Combine, let’s assume that Quinnen Williams might blow scouts away with his performance.  If that’s the case, I think it’s likely that we see Williams sneak past Rashan Gary here.

The Raiders have needs at nearly every position.  With three picks in the first round, look for them to go after high ceiling prospects that will make a difference, and fit their scheme, long-term.  I think Rashan Gary is best as a defensive end, although Jon Gruden and the Raiders could look to move him around the front seven.

The Buccaneers pick here in the first round is a total wild card for me as I honestly have no idea what they’re going to do with it.  I’ve had Josh Jacobs and Montez Sweat off the board here in my previous mock drafts, but cornerback is also a need for them.  Instead, let’s give them an athletic defensive tackle with a very high ceiling.

Unless I see something that changes my mind at the NFL Combine from one of the quarterback prospects, I don’t think the Giants would look at a player to succeed Eli Manning this year.  Instead, let’s go with the same pick as my last mock draft and shore up their offensive line troubles that have plagued them for quite some time.

Unlike the Giants, I don’t believe that the Jaguars can afford to wait until 2020 or 2021 for a quarterback. They could opt to make a deal for one of the free agent quarterbacks that will be available, but let’s look at a prospect that could be a long-term solution. Dwayne Haskins isn’t a pro-ready quarterback at this point in my opinion, but I think he’s the best choice in this draft class.

Ziggy Ansah could be a cap casualty for the Lions, leaving them with a giant hole upfront. Clelin Ferrell is a suitable replacement, and is versatile enough to play downs at outside linebacker as well.

This pick hasn’t changed from my last mock draft. I still believe that protecting Josh Allen, as well as finding him a few more weapons on offense, are going to be some of their biggest needs in this year’s draft. The talent gap between Jawaan Taylor and Jonah Williams isn’t massive, and Williams should be ready to contribute from day one.

First off, I don’t believe that the Broncos making a deal for Joe Flacco takes quarterback off the board for them here. If reports are true that John Elway is impressed with Drew Lock, this could be an easy pick to predict.

The Bengals bringing in Zac Taylor as head coach could be a sign that the team is nearing the end with Andy Dalton. But with needs at other positions, they might be forced to stick with dalton for at least another year. I’m very high on Devin White’s abilities at inside linebacker, and could be someone to man the Bengals defense for a very long time.

Montez Sweat had a huge week at the Senior Bowl, which moved him up my draft board. If he has a similar performance this week at the NFL Combine, it’s very likely that he’s not on the board here at twelve.

I still have huge concerns about Kyler Murray’s success long-term, which I don’t think is something that will be answered this week at the NFL Combine. Measurables are going to be a huge box for teams to check, but the game film is important, too. He has flashes that show a high ceiling, but struggled mightily against Alabama in the College Football Playoffs.

The Falcons upgraded their offense last year with the addition of Calvin Ridley, which proved to pay off dividends. This year, I’m looking for the Falcons to upgrade their offensive line. Cody Ford is athletic and versatile enough to contribute across the offensive line.

Let’s assume that the Redskins are looking to the future with this pick. Daniel Jones has the size and mechanics, he’s the prototypical quarterback in this draft class. His game film isn’t great, but that wasn’t all his fault, as his receivers were responsible for a lot of dropped passes.

The Panthers announced today that they are moving on from defensive backs Captain Munnerlyn and Mike Adams, which is going to create a hole for them in the secondary. With that being said, I think the Panthers can select an offensive tackle in the first round and then look at the secondary in the second or third round.

The Browns offense took a huge step forward in 2018, which could allow the franchise to focus on defense with their first-round pick. I’m a greedy Williams fan, and while I believe that he could become one of the top lockdown corners in the league, pairing him with Denzel Ward will give him time to grow into the position.

I considered moving Jachai Polite down and having the Vikings select Florida State Edge rusher Brian Burns instead, but I think Polite might be a better prospect that can play OLB today. I believe that interior offensive line depth is an option here, too.

I’ve had a wide receiver mocked to the Titans in my previous mock drafts, but let’s not forget that they need to upgrade their secondary. I think this receiver draft class is pretty loaded at the top, which gives the Titans some flexibility with this pick.

The Steelers are going to have some pretty massive holes on the offense with the departure of Le’Veon Bell and likely departure of Antonio Brown. If they’re smart, the Steelers will try to get a piece or two back in a trade involving Brown.

The Seahawks need to get more aggressive upfront. I’m very high on Zach Allen, who played at defensive end, as well as defensive tackle, for Boston College. He has a knack for the ball and is a constant pressure inside the pocket.

D.K. Metcalf would be a steal for the Ravens if he fell to them here. I have Metcalf as the top receiver on my board, but I don’t think that prospects like Kelvin Harmon or Marquise Brown are a significant drop in talent, so they could be an option here if Metcalf is off the board.

The NFL Combine is going to be huge for Byron Murphy. He wasn’t asked to play a ton of tight coverage at Washington, so he could check a lot of boxes for NFL franchises with an excellent performance.

The Eagles need to find a long-term answer at running back, which is where Josh Jacobs comes in. He’s a one-cut style back that looks for contact and punishes defenders. Jacobs is a perfect fit for the Eagles, if he’s still on the board here.

N’Keal Harry isn’t in the top three on my draft board, but I think he could fit what the Colts are looking for. He’s not flashy and isn’t polished when it comes to breaking out of his routes, but N’Keal Harry has a high ceiling and could be a nice weapon for Andrew Luck.

The Raiders aren’t going to find the next Khalil Mack in this draft class, but Brian Burns might be the closest thing. He’s a versatile edge rusher that can play defensive end or outside linebacker. I think the Raiders best option is to move out of the fourth pick and load up on picks for 2020, but they got a pretty nice haul in this mock draft.

I had Jeffery Simmons sneaking past Dexter Lawrence in this mock draft, but the recent news that he tore his left ACL is certainly going to change things. The Chargers need help at the interior defensive line, and while there are better prospects that Dexter Lawrence, they’re not going to be available at this pick.

As I mentioned in my last mock draft, I have a second round grade on Oruwariye, but with three of them already off the board in the first round, I don’t think the Chiefs can afford to be picky. Simply put, they have to upgrade their secondary in a big way.

It wouldn’t surprise me to see the Packers select a wide receiver with this pick, but I think they’re in a position to make a play for Antonio Brown. If that’s the case, they could opt to upgrade their secondary with a ballhawk in Washington’s Taylor Rapp.

Jaylon Ferguson will not be allowed to participate in position drills or measurables, but will be allowed to take part in medical evaluations and team interviews. I think he’s come a long way and has shown that he has matured. The Rams are going to have to make some tough financial decisions on defense, which could open the door for Ferguson to sneak into the first round.

I’ve had Hockenson locked to the Patriots now for several mock drafts. As I’ve mentioned before, even if Rob Gronkowski returns to the Patriots in 2019, they could still look to draft Hockenson here. Defensive pass rush is certainly a possibility here, too.

Clemson quarterback Trevor Lawrence has long been thought of as the clear QB1 for the 2021 NFL Draft by...
Read more
NFL Draft News

Within the past week, several conferences, including the Big Ten and Pac-12, have opted to alter their collegiate schedules. The coronavirus pandemic remains a...
Read more
2020 Summer Scouting

The National Football League, in general, is built upon mid-round NFL Draft prospects. Players like these not only provide much needed depth on the...
Read more
Position Breakdowns

As we begin to dive deeper into summer scouting and prepare to release our 2021 NFL Draft big board, it's also time...
Read more
NFL Draft

It’s Draft Day, Folks! Tonight is the first round of the 2020 NFL Draft.  With teams and personnel working from home during the...
Read more

It is time for my annual Mock Draft. First, it is important to note that 2020 will be a crazy draft in...
Read more

The NFL Draft is around the corner, and even if there are a lot of question marks regarding where and when it...
Read more
Facebook Instagram Twitter