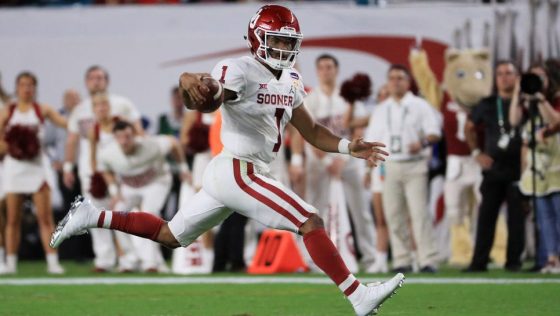 With the NFL Combine behind us, and the NFL Free Agency set to start today, it’s time to take another look at the first round of the NFL Draft.  Of course this is all likely to change as we progress through Free Agency, but we wouldn’t want our Mock Draft Monday to be any other way.

Let’s buy into the hype here.  If the Cardinals are infatuated with Kyler Murray, and willing to move Josh Rosen, it’s a whole new ballgame in terms of how this mock drafts plays out in comparison to past versions.

I’m not particularly high on Murray’s success long-term in the NFL, but the Cardinals hired Kliff Kingsbury to revamp a very poor Arizona offense.

If the Cardinals select Kyler Murray with the first pick, the big winners might be the 49ers.  San Francisco is going to have a healthy Jimmy Garoppolo to start training camp, but could also have one of the most talented pass rushers in this draft class in Nick Bosa.  If that’s the case, look for the 49ers to compete for the division in 2019.

Now that the Raiders were able to find a replacement for WR Amari Cooper by acquiring Antonio Brown from the Pittsburgh Steelers, let’s look at upgrading the defense here.  If Oakland wants to compete long-term, they’ll have to eventually find a replacement for Khalil Mack’s production.  Montez Sweat isn’t the same type of player, but an impressive draft season, by way of monster-like showings at the Reese’s Senior Bowl and NFL Combine, should be enough to catapult Sweat up draft boards.

It might be a bit early for Montez Sweat, but I don’t believe that the Raiders are a ‘win now’ type of team.  This gives Sweat an opportunity to grow into the position and refine his skillset.

The Buccaneers are my first question mark in this draft.  There are a ton of talented prospects available here to fill one of many needs for Tampa Bay.  I’m electing to go with an anchor on the offensive line in Jawaan Taylor.  It’s not their most pressing need, but he can play either tackle position and protect the quarterback well, even as the Buccaneers could look to part ways with Jameis Winston in the future.

The Giants still seem committed to rolling with Eli Manning in 2019.  If that’s the case, look for GM Dave Gettleman to get back to basics and find a stud edge rusher to head the Giants defense.

If the Jaguars are going to go all in on attempting to sign Nick Foles, they’ll have to protect him.  I love plugging Jonah Williams into this offense to provide a massive upgrade at the tackle position.

For what it’s worth, I have Josh Allen rated third on my Big Board.  I’m really high on his abilities, but having Kyler Murray off the board at one really moved things around.  If I were head coach Matt Patricia, I’d be salivating at the opportunity to draft Josh Allen this far down the draft board.

Depending on who you ask, the Buffalo Bills were almost able to nab Antonio Brown.  Drafting a prospect like D.K. Metcalf makes sense for Buffalo.  They’ll be able to get the top receiving prospect in this draft class, but more importantly, they’ll be able to give quarterback Josh Allen a much needed offensive weapon.

The Broncos are committing to Joe Flacco at quarterback, which means that they’ll have to give him time to make throws.  Cody Ford would be a nice piece for offensive line coach Mike Munchak.

Devin White had a great showing at the NFL Combine and could start for the Bengals on day one.  A tight end is also an option here as head coach Zac Taylor looks to revamp the Bengals offense.

The Packers have two first round picks in 2019 and should use one to improve their pass rush.  I’m not sure how Rashan Gary will fit into defensive coordinator Mike Pettine’s scheme, but he’s a solid pass rusher.

Haskins is the best quarterback on my big board, but I think Kyler Murray will ultimately leap frog him on draft day.  If Miami decides to let Haskins start on day one, they’ll have to upgrade their offensive line a bit.  Idon’t care what anyone says, Dwayne Haskins isn’t a runner, as noted by his 5.04 40-yard dash time at the NFL Combine.

I’ve got quite a bit of a gap in talent between Quinnen Williams and Ed Oliver, but they’re both very different type of prospects.  The Falcons are going to get an athletic tackle to plug the holes up front, but also one that can get out in space and make a tackle or two.

I don’t see a long-term answer at quarterback for Washington on this roster, which includes Alex Smith, Colt McCoy, or Case Keenum.  It’s tough to say that Drew Lock is going to be any better in the long run, but Washington should be looking for an answer in the early round of this draft.

The Carolina Panthers signed Strong Safety Eric Reid to a three-year extension this offseason, but Free Safety Mike Adams is turning 38 later this month.  Deionte Thompson is an intriguing prospect that can contribute immediately.

An additional weapon at Wide Receiver should be a possibility here, but instead, let’s lock up the secondary.  Pairing Greedy Williams with last year’s pick Denzel Ward is going to pay dividends long-term.

I have Brian Burns at fifteen on my big board, but I just couldn’t find a place to fit him in earlier.  It’s unlikely that Burns falls to the Vikings here, but he’s a perfect fit for Minnesota to upgrade their pass rush.

The Titans didn’t have a 1,000 yard pass catcher on their roster in 2018.  I don’t think that Hockenson is capable at producing at that high of a level, but he’s certainly better than the rest of their roster.  Not to mention that he’s a steal at nineteen.

The Steelers have parted ways with Le’Veon Bell and Antonio Brown.  They’ll have to replace the production level at some point, but they have a more pressing need in the secondary.  Byron Murphy is high up on my big board, and really isn’t that far off from Greedy Williams.

Safety is also a possibility here, but the Seahawks need a Defensive Tackle to stop the run and free up the pass rush off the edge.  Also, I have Dexter Lawrence pretty high on my board.  I’ve seen others with him in the late 30 to 40 range, but I just don’t see it.

Weapons for Lamar Jackson has to be Baltimore’s top priority in this draft, and I think they’ll have to use multiple draft picks to accomplish this.  Josh Jacobs is a one-cut style back that can open up the passing game for the Ravens.  More importantly, it’s going to allow Jamar Jackson to stay in the pocket and force defenses to cover all aspects.

I don’t think the Texans can afford not to upgrade their offensive line in the first round.  Andre Dillard is a prospect that can start for the Texans at either tackle position, a desperate need for Houston.

With three first round draft picks, the Raiders are going to be able to fill plenty of needs.  Finding a field general for the defensive side of the ball is something that new GM Mike Mayock should be on the lookout for.

I’ve had several positions mocked to the Eagles here at twenty-five, but with the way this mock draft has played out, they have to be intrigued by the Defensive Tackle prospects.

The Indianapolis Colts have the highest bank roll heading into free agency, so they could lean towards addressing their secondary issues there.  However, DeAndre Baker has a high ceiling and would contribute immediately.

I know it’s unlikely that the Raiders use all three picks in the first round on defensive prospects, but by doing so, they’ll be able to lockdown three key positions long-term.

The Los Angeles Chargers took a huge step forward in 2018, but the team wasn’t able to keep Philip Rivers upright, giving up 32 sacks.  Greg Little is a versatile offensive lineman that can play on the interior or outside at tackle.

I don’t think there’s any question that Kansas City has to improve in their secondary.  In my opinion, Rock Ya-Sin isn’t a prospect that can contribute right away, but does have a high ceiling and could turn into a long-term answer for Kansas City.

The Packers could elect to draft a Tight End or Wide Receiver with they 12th overall pick, but I think they get similar value here at thirty.  I have Noah Fant ranked just below his Iowa team mate T.J. Hockenson on my big board.

The Rams were able to sign Eric Weddle after the Safety was cut from the Ravens.  It was also announced that Dante Fowler, Jr. decided to stay with the Rams, but I still think that the Rams can look at upgrading the pass rush by taking a look at Jaylon Ferguson.

There are tons of defensive prospects in this draft class that could fit into the Patriots scheme, but I don’t think they’d have to go very far to find one in the first round.  Zach Allen is a versatile player that can play all across the defensive line, but looked best with a hand in the dirt at Defensive End.