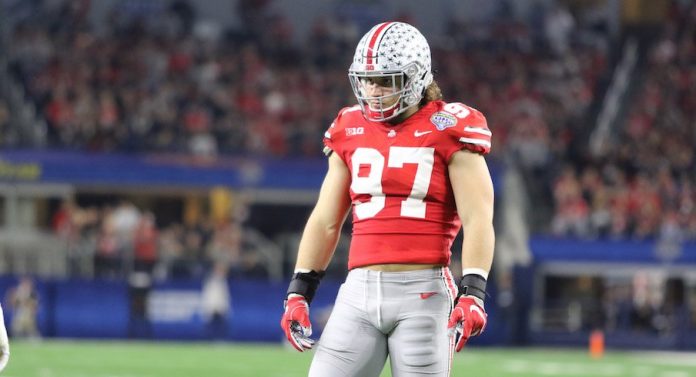 Despite rumors of Kyler Murray at one, betting on the 2019 quarterback class is a huge gamble. If Rosen was in this class, he would be the slam dunk top quarterback prospect. For a team with as many holes as the Arizona Cardinals, you either need to trade down for additional draft capital or take the best player available. The best player without question is Ohio State defensive end Nick Bosa. Bosa’s ability to convert speed to power and win with hand technique presents a can’t miss prospect and future all pro selection.

The 49’ers desperately need an edge rusher, so they take one of the best ones available. The best case scenario is that the Cardinals draft a quarterback, but in this scenario that doesn’t happen. Josh Allen is a solid Edge rusher with underrated coverage skills. Allen will be a day 1 starter and the 49’ers get the pass rusher they need.

The New York Jets should be looking for a skilled edge rusher in this draft, but I don’t think they’ll be able to pass on Quinnen Williams here. Williams is an excellent defensive tackle that consistently finds ways to disrupt the pocket and pressure the quarterback, which fits perfectly into what defensive coordinator Gregg Williams is looking to do.

The Raiders finished dead last in sacks last year, finishing with only 13. Gary is a versatile defensive lineman who can play edge, or he can put on some weight and play inside. While Gary isn’t the best edge player on the board, he does offer athletic upside that a team can become infatuated with.

The Buccaneers just lost Kwon Alexander to the 49ers in free agency. This leaves a big hole next to Lavonte David. White is one of the more talented off ball linebackers to enter the league in recent memory and will help to improve a Buccaneers rush defense that allowed a staggering 4.7 yards per carry to opposing offenses this past season.

The Giants’ GM has openly stated that they are committed to the run game, and he proved that by trading OBJ. While there may be some better overall offensive linemen on the board, I think Dave Gettleman wants a mauler, and Cody Ford is exactly that. If the Giants are truly committed to the run and want to make things easy for Saquon Barkley, drafting Cody Ford will help immensely.

With the quarterback position now locked up, the Jaguars can focus elsewhere. There isn’t a prospect in this class that’s had a better pre-draft process than Montez Sweat. Jacksonville could also look at tight end or offensive tackle here.

The Lions invested big money into Trey Flowers in free agency, and they get another edge player through the draft. Ferrell is a prototypical Matt Patricia lineman and is one of the more polished rushers in the draft. Ferrell will pair up with Flowers to form a formidable duo coming off the edge for Detroit.

The Bills offensive line is just a mess. They recently signed Ty Nseke to potentially play right tackle opposite Dion Dawkins. Whether you slot Taylor at right tackle or inside to guard, he is a player who you can slide in early to protect your franchise quarterback Josh Allen, who needs all the help he can get.

Drew Lock is a prototype John Elway quarterback. Joe Flacco is not elite and will not be the guy Denver has faith in going into the 2019 season. In this shocking turn of events Lock is the first quarterback off the board and Denver gets their guy for the future.

I don’t envision a scenario in which Kyler Murray falls out of the top five, let alone all the way to eleventh. It’s much more likely that a team trades up for him rather than seeing him fall like this. Nonetheless, this is a steal for Cincinnati. New head coach Zac Taylor will be able to see what he has in Andy Dalton, while also bringing Kyler Murray up to speed on running an NFL offense. If Murray is off the board, look for the Bengals to take a hard look at Tight End or linebacker.

The Packers go out and get Aaron Rodgers some much needed help. D.K. Metcalf is the best receiver in the draft and will help Aaron Rodgers and new head coach Matt Lafleur form a dominant offense.

The meteoric fall of Ed Oliver ends with Miami. Before the season, there was a legitimate argument between Oliver and Nick Bosa as the top overall prospect. After an up and down season, here we are. Tough call between Oliver and Brian Burns at this slot, seeing as Miami needs help at both interior defensive line and edge. In the end, the upside of Oliver won out.

The Falcons were plagued with injuries last year and ended up missing the playoffs. The Falcons have a top 15 pick and will improve an already good defense by drafting a top 5 player in this class. Brian Burns is an elite prospect and a true edge rusher. Burns has some of the best pass rush moves in this class. Line him up opposite Takk McKinley and you have two lethal edge rushers on your team.

Washington doesn’t have a long-term solution at quarterback on their roster. Daniel Jones has the prototypical size and mechanics that a franchise is looking for, but likely isn’t a day one starter. This pick gives Washington the flexibility to bring along Jones at his own pace, rather than letting him sink or swim on his own.

With the recent trade of Odell Beckham Jr., the Giants are now starved for play-makers on the outside. Enter Hakeem Butler, who has all the tools to develop into an alpha option for a vertical offense.

The Vikings address the greatest need on their team with this pick, Interior offensive line. Bradbury was a combine standout who has the tape to match it. Bradbury is my #1 interior ofensive lineman and is a top 15 player in this class. He is an instant starter and upgrades the Vikings O-line.

Finding an offensive weapon for QB Marcus Mariota was a priority for me here. With Metcalf and Butler both off the board, I opted to select Hockenson, who will contribute as a receiver as well as in the trenches as a blocker.

The Steelers are in desperate need of defensive talent. They got a good one with T.J. Watt, but other than that the defensive talent they have drafted has been bad. Devin Bush is a very talented linebacker that can take over the athletic middle linebacker role for Ryan Shazier.

The last piece of the legion of boom has now vacated Seattle. All pro safety Earl Thomas is now a Raven, leaving a huge hole at the free safety position and probably more important, leadership has been lost. Gardner-Johnson is an excellent candidate to take over the reigns and rebuild what was once the best secondary in the NFL.

The Ravens are in desperate need of a playmaker. Coming off of a promising year with rookie QB Lamar Jackson, the Ravens look to get him a receiving weapon. Harry is a versatile playmaker who can play outside or in the slot and can create yards after catch to make things easy for Jackson.

Houston has to find someone to keep Deshaun Watson upright. I would have been satisfied with someone like Greg Little here, but with Andre Dillard on the board, it was a no-brainer. Dillard will be able to start immediately for the Texans, and with the Matt Kalil signing, Dillard will be able to cut his teeth at right tackle first. This would be a fantastic bump for a below average offensive line group.

After testing very well at the combine Greedy Williams will be an attractive pick at corner. The Raiders secondary needs some work and Greedy will make that work easier.

The Eagles seem pretty content with what they have at the corner position but I big question mark looms at the free safety spot where Rodney McLeod is returning from a serious leg injury. Adderly is the perfect fit for a defense who wants to be as multiple as possible in their defensive secondary.

The Colts shocked the world by recovering an almost disastrous season and made the playoffs. Wilkins provides a driving force in the middle of their defensive line. Wilkins has natural ability to penetrate and get to the quarterback. Indianapolis selects Wilkins with the hopes that he becomes their defensive centerpiece for years to come.

Jon Gruden and Mike Mayock will have to find a long-term solution for their backfield. By fitting Josh Jacobs into this equation, they’ll get an every down back that will punish defenders. Pairing him with a speedy change-of-pace back is going to be a priority.

The Chargers need someone to complete their defensive line, and in this case it turns out to be Dexter Lawrence. Lawrence is a massive run-stuffer who will sit in the middle of the defensive line and swallow runs up the gut.

There are needs everywhere on defense for the Kansas City Chiefs. Their secondary is in shambles. Byron Murphy presents an immediate upgrade to a defense in dire need of play-makers.

The Packers are looking to upgrade their offensive weapons in this mock draft and they picked two great guys to do that. With this pick, the Packers select a top 15 for me and a true dynamic receiving threat at tight end. Fant is an elite athlete and should provide some great talent for Aaron Rodgers.

I have Zach Allen rated higher than most, but with a caveat. I don’t see Allen translating as an edge rusher in the NFL, but rather as an inside defender that can disrupt the pocket from the middle out. This isn’t the sexiest pick for the Rams, but I think it gives them more flexibility to continue doing what they have been doing for several more seasons.

With the recent retirement of Gronk, the Patriots get a well-rounded tight end in Irv Smith to take over for him. Smith provides a good receiving threat who can also help as a blocker. The Patriots get Tom Brady another threat as they look to continue their reign over the NFL.

Clemson quarterback Trevor Lawrence has long been thought of as the clear QB1 for the 2021 NFL Draft by...
Read more
NFL Draft News

Within the past week, several conferences, including the Big Ten and Pac-12, have opted to alter their collegiate schedules. The coronavirus pandemic remains a...
Read more
2020 Summer Scouting

The National Football League, in general, is built upon mid-round NFL Draft prospects. Players like these not only provide much needed depth on the...
Read more
Position Breakdowns

As we begin to dive deeper into summer scouting and prepare to release our 2021 NFL Draft big board, it's also time...
Read more
NFL Draft

It’s Draft Day, Folks! Tonight is the first round of the 2020 NFL Draft.  With teams and personnel working from home during the...
Read more

It is time for my annual Mock Draft. First, it is important to note that 2020 will be a crazy draft in...
Read more

The NFL Draft is around the corner, and even if there are a lot of question marks regarding where and when it...
Read more
Facebook Instagram Twitter