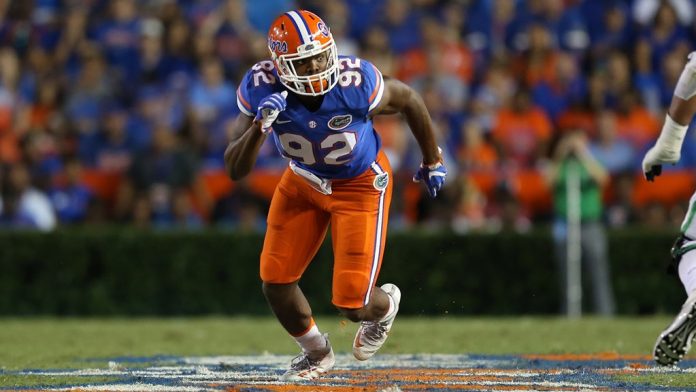 Welcome to the inaugural prospect fight night! Each week we’ll be diving deep on prospect matchups in big games across the country. Top tier prospects go head to head each week and I’ll be the one that determines a winner between them. Week 0 provided a very sloppy game of football, nevertheless, there were some big-name prospects that squared off on Saturday. Without further ado, let’s get these fights underway!

In the first fight of the night we have two cornerback prospects vying for the title of best corner in Florida. Fighting out of the blue corner, we have the fleet-footed, highly touted prospect from the University of Florida, C.J. Henderson! Fighting out of the green corner, we have the sleeper corner; the big hitter from the University of Miami, Trajan Bandy!
Coming into this match-up, C.J. Henderson has all the hype around him. People all over the country have been hearing how he’s one of the best corner prospects in the country, and he’s here to prove that. On the other hand, we have a guy who’s been quietly flying under the radar, Trajan Bandy. People might not be as familiar with Bandy, but he is not one to be messed with; he can lay the wood and will take any opportunity to do so. Let’s check out their performances.

Let’s look at C.J. Henderson first. The positive component of his game is his ability to close on any route incredibly quickly. His click-and-close ability is almost unmatched by anyone in this class. Mix that with good positioning and you can get a corner built for interceptions and pass-breakups. Henderson showed some of that upside against Miami. His closing speed was on full display and his ability to contest receivers at the catch point was shown by his big pass breakup on Jeff Thomas in the fourth quarter on, what could’ve been, the game winning touchdown for Miami. Unfortunately, for every positive, there is a negative. The downside to Henderson’s game is his physicality and tackling. Evident by many plays against Miami, Henderson is not a good tackler; players would run through his tackles like he wasn’t even there. Along those same lines, Henderson’s run defense is lacking. He made a few business decisions on Saturday and completely removed himself from run defense. While the pass coverage from Henderson was good, his competitive toughness is alarming. Now let’s look his competitor.

One thing I gathered from watching Trajan Bandy: don’t mess with this guy. Bandy was, by far, the most physical DB on the field that day. From laying big hits on run plays to closing the gap and shutting down screens and check-downs, Bandy was everywhere. Bandy is only 5-9 but makes up for it with his violent play style. He wasn’t very involved in coverage, but he still looked solid there as well. He has quick feet and uses his physicality to stuff receivers at the line of scrimmage. His closing speed seems to be good, due to his quick feet and reactions. The negative to Bandy’s night was getting off blocks. On multiple big plays for Florida it seemed as if Bandy was locked up by a wide receiver. On the 66-yard TD by Kadarius Toney, Bandy couldn’t get off of a Van Jefferson block, and on a red zone reception by Kyle Pitts, which set up the go ahead touchdown for the Gators, Bandy couldn’t get off of a Tyrie Cleveland block. Now let’s get to the verdict.

The winner of the Week 0 undercard fight is… *drum-roll*

Bandy’s physicality and competitive toughness out shined C.J. Henderson’s by miles, and his pass coverage wasn’t lacking so much that he would fall below Henderson’s performance.

Zuniga and Hill were two names that were interesting last year. Zuniga, gaining more and more traction as the year went on, and Hill, being a question mark after his departure from Virginia Tech. This week, however, they faced off. Will the swamp monster from Gainesville take the victory, or will it be the violent storm off the edge from Coral Gables?

We’ll start things off with Zuniga. If there was one word to describe his performance, it would be unblockable. That term gets thrown around like it’s nothing sometimes, but Zuniga was genuinely unblockable against the Hurricanes. Zuniga finished the night with 1.5 sacks and 3 tackles for loss. The young offensive line of Miami just couldn’t handle the experience of Zuniga. He dominated in both pass rush and run defense. His explosive get-off and his hand usage were on display, and he did not disappoint. Florida’s defense had ten sacks on the night. TEN! Zuniga looked like the best player on the field even with a dominant defensive performance by the Gators. For him to stand out among that defense truly says something. Zuniga is a special talent and the Gators should be happy he’s on their side.

On the other team stood Trevon Hill, the transfer with many questions surrounding his game. In his own way, Hill was disruptive. He didn’t get the sacks or the tackles-for-loss like Zuniga did, but he put pressure on RB Malik Davis which caused a fumble that changed the momentum of the game. Plays like that are crucial to winning football games, and whether he filled the stat sheet, there’s no denying he had a major impact on the game. If he can get back to hid level of play he had at Virginia Tech, Miami will have a great pass rusher and another great player on that defense. Now it’s time to announce the winner.

The winner, by unanimous decision, is…
Jabari Zuniga!

Even though Hill forced a game changing fumble, Zuniga was on another level tonight. Not just from Hill, but from everyone on the field. The dominance he played with was truly incredible and fun to watch. It’s going to be fun to see if he can keep up this level of play, because if he can, we’re talking about a legit first round prospect.

Other prospects that stood out tonight: Johnathan Greenard, Kadarius Toney

That concludes fight night: week 0! Football is officially back, and it couldn’t be more exciting! This series will continue weekly and should have more variety of games than this version. Check back next week for players from Auburn vs. Oregon!

Today, we will be continuing our look at every team’s 2020 NFL draft performance with the Cleveland Browns draft. The 2020 NFL Draft...
Read more

NFL Rookie of the Year Odds The 2020 NFL Draft stood as the most distinctive iteration of the event in the league’s long...
Read more