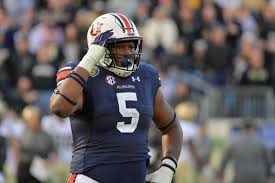 Welcome to week two of Prospect Fight Night. This week, we have a match-up between one of the best interior defensive linemen in the country and the most experienced offensive line in the country. In a game between two highly ranked teams there is NFL talent all over the field. While all the hype surrounds Justin Herbert, the offensive line is one of the most important cogs that makes that Oregon offense roll. Auburn, a team typically known for their offensive firepower, have one of the best, if not the best defensive tackles in college football, Derrick Brown. Let’s get into the fight.

Ladies and gentlemen, tonight, we have a premiere match-up between two of the best units in the country. Fighting out of the blue corner, we have the wrecking ball from Auburn University, Derrick Brown! Fighting out of the green corner, we have the best offensive line in the country from the University of Oregon! Without further ado, let’s get into the fight!

However, the player their matching up against, Derrick Brown, might have other plans. Derrick Brown, like the Oregon offensive line, is a returning senior looking to lead the Auburn defense to a good season. Brown was widely considered a possible first round pick if he had declared last year. The fact that he returned, means he wrecks havoc on offensive lines for another year. Brown has incredible strength and ability to get into the backfield on any play. Let’s see who won the match-up and why.

The winner of this highly anticipated match-up is…

The offensive line did exactly what they needed to do. Brown finished with 3 tackles and no sacks. Justin Herbert was able to stay upright and drive the ball down the field like he needed to. While Auburn ended up winning the game, Oregon’s o-line was able to keep Brown off their quarterback.

Tune in next week when LSU and Texas play each other. There are a lot of high tier prospects in that game and their going up against each other on almost every snap. It’s gonna be a good one!

Welcome to the third installment of Prospect Fight Night. This week, we’ll be looking at players from the game of the week,...
Read more
Facebook Instagram Twitter