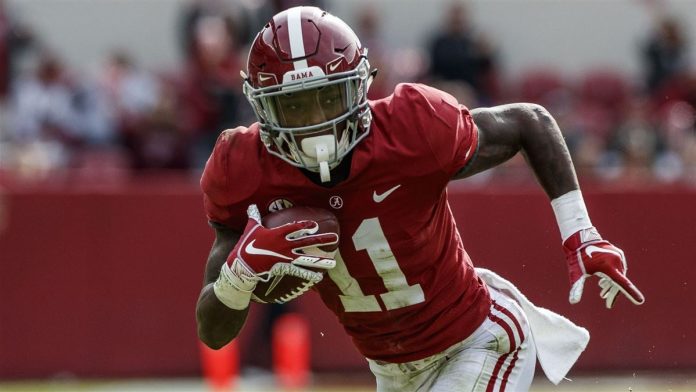 Welcome to week 3 of Prospect Fight Night! This week, we’ll be looking at performances from Alabama vs. South Carolina. Alabama, as we all know, is one of the best teams in the country, and has some of the best talent on both sides of the ball. While they aren’t as talented as Alabama’s roster, South Carolina has some game changers on both sides of the ball. Let’s see how each team stacks up against each other.

Coming into this week, Alabama was ranked #2 in the nation, and for good reason. For the last decade, Alabama has been nothing short of dominant and it doesn’t seem to be coming to an end any time soon. They consistently have top-tier talent on both sides of the ball and are always recruiting well. With the best offensive core in the nation, Alabama is looking to leave their opponents in the dust in almost every game, and with the help of Tua Tagovailoa, Jerry Jeudy and Henry Ruggs, they can most certainly do that. On defense, the Crimson Tide are stout; they have a strong, sturdy defensive line led by Senior interior defensive lineman Raekwon Davis. Due to the unfortunate loss of Junior linebacker Dylan Moses, Alabama has a relatively inexperienced line-backing core, but their defensive secondary rounds out the defense quite nicely. Led by Xavier McKinney and Trevon Diggs, the Tide’s secondary has loads of talent. Let’s look at South Carolina’s squad.

The story for South Carolina is quite different from that of the Crimson Tide. South Carolina is an unranked team who is facing potentially they hardest schedule in all of college football. South Carolina is considered a bottom tier SEC team, but they hope to change that perception soon. On offense, the Gamecocks are led by Senior wide receiver, Bryan Edwards. True Freshman quarterback Ryan Hilinski is going to need to rely on Edwards against this defense. On the other side of the ball for the Gamecocks is interior defensive lineman, Javon Kinlaw. Considered one of the best defensive linemen in the country, Kinlaw is looking to make his presence known against an elite opponent. Let’s get into the fights!

Ladies and Gentlemen, welcome to week three of prospect fight night! We have two fantastic fights for you tonight between talented SEC players! Fighting on the under-card, we have Alabama defensive lineman Raekwon Davis, and South Carolina Defensive lineman Javon Kinlaw! Fighting in the main event, we have Alabama wide receiver Henry Ruggs and South Carolina wide receiver Bryan Edwards! Now without any more hesitation, let’s get into these fights!

Coming into the year, there were a lot of questions about Raekwon Davis. A player who was originally expected to declare last year, but he had a very inconsistent year and was clearly outperformed by the #3 overall pick, Quinnen Williams. Davis returned for his senior season after disappointing last year, he knew he could play better and wanted to prove it. At first glance, Davis is built for the NFL; at 6 foot 7, 308-pounds, Davis is physically imposing, and his play in this game backs that up. He was all over the field. As a run defender, Davis is stout. He doesn’t get pushed around all the much and can easily shed tackles and wrap up a ball carrier. Showing those skills frequently in this game as he would work across multiple blocks and tackle the ball carrier. As a pass rusher, Davis still needs to work on consistency, he’s shown ability to be disruptive in the pass game but it’s not consistent enough. This was a solid game for Davis, let’s see how his opponent played!

Javon Kinlaw is the best player on South Carolina’s team. He has incredible explosiveness off the snap and can really get after the quarterback. While Davis is a superior run defender, Kinlaw is a superior pass rusher. Finishing the game with four tackles, one sack and one tackle for loss, he made his presence felt against Alabama. His initial jump off the snap consistently gave him an advantage against the interior offensive linemen. He was able to get his hands on them first and start pushing them back before they could counter him. He plays with so much speed that it’s hard to stop him. However, if an offensive lineman can match his get off and counter him before he initiates his bull rush, he’s stonewalled. Kinlaw struggles to string pass rush moves together and make moves after his initial push. In the run game, his get off works just as well, but if he gets double teamed, he struggles to find success. Against Alabama, Kinlaw performed well and proved why he’s considered a top interior defensive lineman in this class.

And the winner is…

While Raekwon Davis was good, Kinlaw was better. He was involved more in big pass rush plays and was able to bring down the quarterback.

Henry Ruggs is one of the most, if not the most, explosive players in all of college football. He is a true threat to take the ball to the end-zone on any given play, and that was shown against South Carolina. Ruggs took a simple quick slant route 81-yards for a touchdown and was pulling away from defenders all the way down the field. Ruggs is an elite play-maker and potentially has the most upside of any receiver in this class. Henry Ruggs is the fastest player I have ever seen play football. However, that’s where his weaknesses come into play. Currently, Ruggs is reliant on his speed and his speed alone. His route running isn’t very nuanced, and he’ll want to improve on that. His route tree is limited, and his releases seem limited as well. While winning with pure speed isn’t a problem, developing some of these other skills can make him an overall weapon that could possibly become one of the top receivers in the NFL. Ruggs finished the game with 122 yards and a touchdown. Let’s check out his opponent.

Like Javon Kinlaw, Bryan Edwards is the leader of the offensive unit of South Carolina. Edwards is the focal point of that offense and it was proven right out of the gates as they tried to get him involved early and often. Edwards is a power-forward type of receiver. He excels in contested catch situations and is also quite crafty after the catch. Most of his big plays come against smaller cornerbacks who can’t physically match up with him. However, Edwards needs to gain consistency when in contested catch situations. He struggles against bigger corners who play physical as well. Edwards finished the game with 79 yards and no touchdowns.

And the winner is…

Even though Alabama has three other great receivers to throw to, Ruggs was one of the best on the field, and unfortunately for Bryan Edwards, he just couldn’t match up.

That concludes this week’s installment of Prospect Fight Night! Thanks for reading and I hope you’ll come back next week!

Tua Tagovailoa: Where will he end up?

A lot of the current discussion amongst NFL Draft aficionados has to do with where Tua Tagovailoa, now that he's declared his...
Read more
Facebook Instagram Twitter