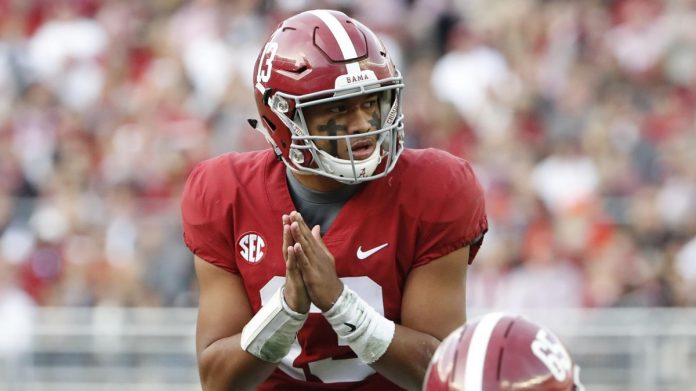 Football season is over, and with no games to speak of, this is generally the time of year in which the sport takes a backseat to first the NBA playoffs, then MLB baseball. Obviously, this slow period for the sport means there is nothing to talk about as it relates to the NFL Draft, right? Wrong! Although only a fool would think we can make 100% accurate scouting reports about players months before the season begins, that doesn’t mean I’m not going to try. So, without further ado, here is the first installment in a little series I like to call “Summer Scouting”; with our first player: Alabama QB Tua Tagovailoa.

For a team that has been as consistently dominant as the Crimson Tide over the last decade or so, never before have we seen an Alabama quarterback garner this much NFL hype. Tagovailoa is breaking the Alabama mold of okay college starter but mediocre NFL prospect and, oh man is it refreshing. Tagovailoa is dynamic, with the ability to produce big plays with his running ability, but he doesn’t rely upon that skill, instead, using it to compliment his pocket passing. When it comes to throwing slants or crossing routes, Tagovailoa is deadly accurate, particularly along the sidelines. Also, for as much talk as there is about his apparent lack of arm strength, it seems to me Tua has more than enough velocity on his throws to survive.

Last season was Tagovailoa’s first as a starter, and that showed a bit when it came to the more nuanced parts of playing quarterback. Though he showed improvement throughout the season in this area, his footwork was often incredibly messy, and it shows on some of his uglier missed throws. Tua also has a habit of missing way too many open deep throws, though he mixes in enough “wow” throws to make you forget about them. I’m also curious to see if his late-season struggles were a sign of things to come or if it was simply a case of fatigue and/or injury.

As good as he was last season, I think it may be time to just tap the brakes on the Tua Tagovailoa hype train a little bit. I think he’s an excellent prospect with the arm and production to be special, but I also see some holes in his game that will be difficult to fix, such as the deep accuracy issues and late-season turnovers. Ultimately, however, he is uniquely talented and will probably be a first-round selection barring a major drop-off in play. As long as he takes care of business this season and improves some small flaws, Tua should remain a rock-solid NFL prospect.

The 2020 College Football season is just a few short months away. If the NCAA is able to successfully protect it's student...
Read more
Mock Draft

It's finally here! My first 2021 NFL Mock Draft of the season.  We're only a few months removed from the 2020 NFL...
Read more
Articles

Today, we will be continuing our look at every team’s 2020 NFL draft performance with the Cleveland Browns draft. The 2020 NFL Draft...
Read more
Articles

Football season is over, and with no games to speak of, this is generally the time of year in which the sport...
Read more
Facebook Instagram Twitter