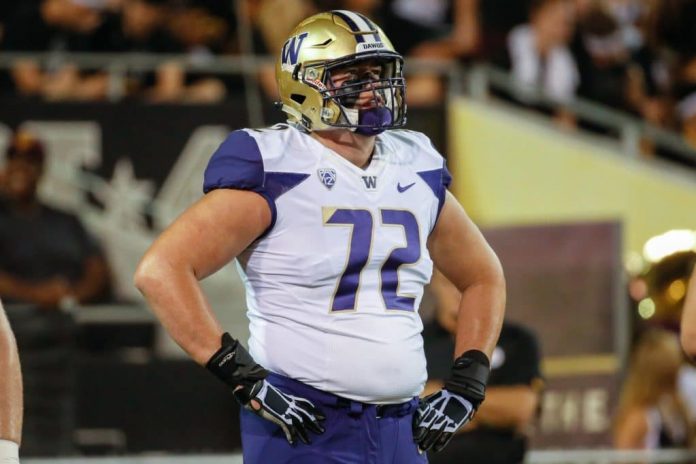 Football season is over, and with no games to speak of, this is generally the time of year in which the sport takes a backseat to first the NBA playoffs, then MLB baseball. Obviously, this slow period for the sport means there is nothing to talk about as it relates to the NFL Draft, right? Wrong! Although only a fool would think we can make 100% accurate scouting reports about players months before the season begins, that doesn’t mean I’m not going to try. So, without further ado, here is the second installment in a little series I like to call “Summer Scouting”; with our next player: Washington OT Trey Adams

As a run-blocker, Adams has the power and aggressiveness that you like in a tackle. His hand placement seems to be generally solid and he packs a powerful first punch when he needs to. When you throw in what appears to be NFL-level size, you can see the makings of a professional tackle here.

The one thing that drives me crazy when watching Adams is how often he ends up on the ground. Whether it’s him getting knocked back defenders or just simply losing his balance, Adams is simply on the ground too much. Another major problem is Adams’ lateral mobility or lack thereof. When moving side-to-side, Adams appears as though he has cinder blocks attached to his feet while simultaneously trying to navigate through quicksand.

The more I watch Adams play, the less I seem to like his game. I think there is still enough talent here to be an NFL player, but I need to see some major improvements this coming season to consider Adams one of the top tackles in the 2020 class. There is certainly upside to be seen with Adams but until his balance issues are corrected and he is able to improve his agility, I think he will struggle to separate himself as a prospect.

Well, we finally made it. On Saturday, the SEC will kickoff it's 2020 College Football season as all teams in the conference will see...
Read more
NFL Draft News

Last week, the 2020 College Football season really got underway as we saw the Big Twelve and ACC kick off their seasons. This week,...
Read more
Prospect Spotlight

Last Saturday was full of excitement and jubilation as the College Football season officially kicked off. While the Big Ten and PAC-12 are still...
Read more
NFL Draft News

On Sunday, in a move that should surprise no one, Penei Sewell announced that he would opt out of the 2020-2021 College Football season...
Read more

Football season is over, and with no games to speak of, this is generally the time of year in which the sport...
Read more
Facebook Instagram Twitter