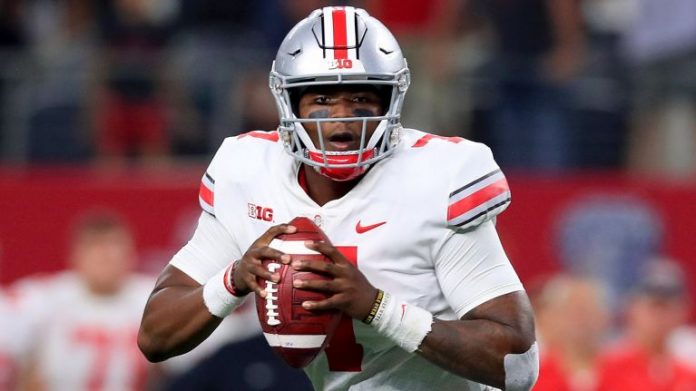 During the 2018 NFL season, we saw five different rookie quarterbacks start games for the team they were drafted by. Now entering the 2019 off-season, quarterback needy teams wonder if they’ll be able to find their star quarterback through the NFL Draft. I’m not going to sugarcoat it; the 2019 quarterback class is weak. If you’re team is hoping to draft a quarterback and have them pan out the way the 2018 class did is wishful thinking. However, there are some impressive traits that the quarterbacks have in this year’s draft. Let’s look at my top-5 quarterback prospects in the 2019 NFL Draft.

All throughout the 2018 college football season I’ve been hearing hype about Kyler Murray, but I didn’t think much of it because I thought he was a lock to play baseball, but I was wrong. Murray burst onto the scene this year, passing for 4000 yards and rushing for 1000. Murray was being groomed as the successor to Heisman Trophy winner and #1 overall pick Baker Mayfield; Murray followed him up by winning a Heisman Trophy for himself. Murray has an elite pairing of athleticism and arm talent. He can push the ball to all levels of the field with velocity without a problem, and if he doesn’t throw it, he’ll beat you with his legs. Murray has blistering speed as a quarterback and will run circles around defenders to get into space. Murray is confident as a passer; he isn’t afraid to throw over the middle of the field. One thing that I would like to see Murray improve is his progression through reads. Murray seems to check his first read and if it isn’t open, he drops his eyes and takes off running. Murray is a polarizing player; his natural athletic ability is incredible, but he needs to develop his decision making and though process as a quarterback to be a successful quarterback, but he has all the tools to do it.

Haskins is a 1-year starter at Ohio State. He came into the year without much knowledge of how he plays as a quarterback. He finished the year as a consensus top 5 quarterback and a Heisman finalist. Haskins is a smart player, he doesn’t force throws and he keeps the ball safe. He is a quick mental processor that works through his reads efficiently. Haskins accuracy on short and intermediate throws is great. Throwing deep down field, however, is his area in need of most work. Haskins almost seems afraid to take deep shots; he’ll opt to throw to someone running an underneath route rather than throw deep to a wide-open receiver. Haskins athleticism is also a big question. He has virtually no ability to escape the pocket and gain a few yards when needed. Haskins has a lot of raw talent, but that’s not to say it can’t be developed. If Haskins goes to a team that can properly develop him as a true pocket passer, then he can become a reliable starter for that team.

Rypien isn’t a big name in this quarterback class. It seems like every day we hear someone talk about Drew Lock, or Daniel Jones, or one of the two guys above Rypien on this list. While it seems a lot of other people are missing out on Brett Rypien, I am not. Rypien has an incredible ability to throw accurate touch passes to all levels of the field. On most throws, the receiver will have a good chance to make a play on the ball, has good general accuracy. Rypien does well to progress through his reads and find his preferred target. He does well to time his throws well and throw with anticipation. Rypien’s athletic ability isn’t great, but he has enough to scramble and escape the pocket to run for a few yards if necessary. Rypien’s biggest flaw is his arm strength, he struggles to generate velocity and he has balls die on him a lot. He also struggles to see pressure at times, he’ll react late and run himself into trouble. Rypien has the tools to be a successful NFL quarterback, from his accuracy to his mental processing. Being realistic, I don’t think Rypien will become a long-term solution for a team, but as a reliable starter for a period of time, Rypien will do just fine.

Entering the year Drew Lock was one of the biggest names of the draft eligible quarterbacks, and he still is. Lock has the talent and potential to be a good NFL quarterback, but he has some flaws that need to be corrected for him to reach his potential. First, let’s state the obvious, Drew Lock has elite arm talent; he can sling the ball down the field with velocity with a flick of the wrist. Okay, maybe not that easily, but you get my point. Lock has flashed some ability to throw with anticipation but is inconsistent. Lock struggles to progress through his reads and is caught locking on his first read far too often. He is atrocious under pressure, if he senses the slightest bit of pressure he panics. Lock tends to throw off his back foot too much. Lock struggles to throw accurately over the middle of the field. He does have a decent ability to be mobile and pick up chunks of yardage with his feet. Drew Lock is going to attract a lot of teams due to his size and arm strength, but that team better have a plan to develop him because it’ll be bad news if they don’t.

Ta’amu is one of my favorite quarterbacks in this year’s class. Ta’amu was the centerpiece that made that ultra-talented Ole Miss offense operate. Yes, Ole Miss didn’t do well this year, but Ta’amu was statistically one of the best quarterbacks in the SEC, and I’m here to tell you why he’s on the better quarterbacks in the NFL Draft. Ta’amu has incredible accuracy to all levels of the field; he always gives his receiver a great chance at the ball. Ta’amu has the arm strength to make any throw on the field. He has the ability to escape the pocket and scramble for a few yards, but sometimes drops his eyes too early and misses some big play opportunities. Ta’amu is always calm in the pocket, he never seems to get rattled and is always confident in his game. The area of concern with Ta’amu, and the reason he is below Drew Lock, is his decision making. Ole Miss had one of the simplest offenses in the country. Ta’amu was blessed with easy reads and quick throws to make things easy for him, so we don’t know how he’ll be in a more complex offense. Another concern with his decision making is he would make a few dangerous throws each game that would put the ball in harm’s way. In my opinion Ta’amu will be a spot starter/preferable backup in the NFL; the talent has is most definitely valuable.

Every year in the NFL Draft, we see an NFL wide receiver that measures off the charts and looks...
Read more
2021 Scouting Reports

The Big 12 has been known for their electric offenses for as we can remember. Last season alone, 7 out of the 10 teams...
Read more
Facebook Instagram Twitter