Moving forward through the position rankings for the 2021 NFL Draft, today we take a look at the wide receivers in this draft. If you missed my last article for the running back position, you can find it here. You can also find my article for quarterbacks here. Let’s dig in. 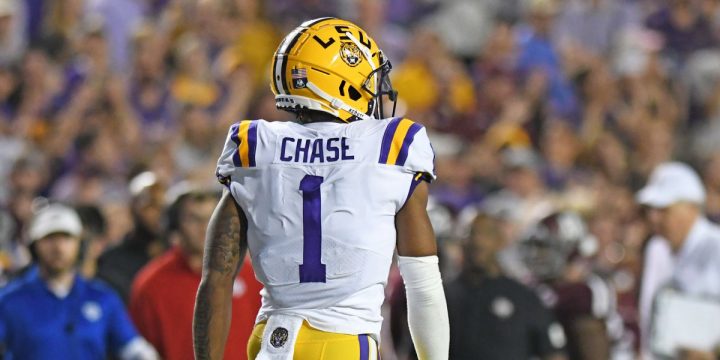 In 2019 Ja’Marr Chase had an amazing season. In LSU’s legendary championship run he caught for over 2,000 yards receiving and 23 touchdowns. Prior to this season, Chase decided to opt out and prepare for the 2021 NFL Draft. Judging by how rough of a season it has been for the LSU Tigers this year, it was a smart move. Chase is a receiver who can do it all. Great route running, great hands, great ability to catch contested balls, etc. You name it, Chase can do it. The only issues with him are minor gripes that would be extremely nit picky. Easily one of the best wide receivers, if not the best in this Draft.

Devonta Smith has had quite the last two years. Last season he had phenomenal production while sharing catches with Henry Ruggs and Jerry Jeudy. This season Devonta Smith was the clear number one receiver while still being surrounded by talented receivers like Jaylen Waddle and John Metchie. The past two seasons Smith has amassed over 1,200 yards receiving and a combined 29 touchdowns over the past two years. Smith is an amazing route runner, he has some of the most reliable hands of any of the wide receivers in this class that I have seen. There are issues with Smith’s size. He is on the skinny side but it doesn’t seem to affect his game that much. Still, it might be a good idea to try and add some weight to his frame. Regardless he is going to be a phenomenal receiver at the next level.

Last season Rashod Bateman was turning heads. He finished the 2019 season with over 1,000 yards receiving and 11 touchdowns. And those stats were with splitting catches with Tyler Johnson. This year Bateman played a handful of games and then opted out to prepare for the Draft. His stats for this season were nothing to write home about but he still looked good. Bateman is an explosive receiver with phenomenal route running. He makes it look so easy to get over the top of defensive backs and get open. He is lethal with the ball in his hands after the catch. Bateman needs to work on his ability to adjust after he gets rerouted by defensive backs. Getting back on course after having his route interrupted is the biggest adjustment he needs to make.

Rondale Moore has had an interesting career at Purdue. In 2018 he put himself on the map with a phenomenal season receiving for over 1,000 yards and 12 touchdowns. Unfortunately in 2019 Moore was out for the majority of the season with an injury and then he has struggled with injuries some in the 2020 season. Moore is a fun prospect to watch. He has incredible route running and he is a monster once he gets the ball in his hands. The issues that surround Moore are his durability issues and his size. He is not your traditional build for a receiver. His lack of size shows whenever he has to go for a contested ball or whenever a corner gets physical with him. Regardless, when healthy Moore is a valuable weapon and is one of those wide receivers that possesses a constant big play threat.

If not for a season-ending injury this season with a broken ankle, I would have Jaylen Waddle so much higher on my board. While I have no doubt that he will return at full health, to be cautious I will place him here. Waddle was having such a strong start to his season and was really answering a lot of questions and doubts about him through the summer. Through four games he had already surpassed his receiving totals for the 2019 season. Waddle will possibly be one of the fastest receivers in the Draft should he forgo his senior season. He has ridiculous speed and is a threat in so many aspects of the game. He can be used in the slot, screens, even on sweeps. Waddle is one of those multi-talented wide receivers who is going to be deadly at the next level.

Chris Olave is arguably the best route runner that will be going into this NFL Draft. In 2019 Olave caught for just under 1,000 yards and had 12 touchdowns. Considering the amount of targets that the Buckeyes have and the offense they run, that is pretty good. So far in this shortened season his stats haven’t been that strong, but he has been playing good ball. Olave is not a receiver that is going to be the kind of guy to get a lot of yards after the catch. But the fact that he can run routes so well, create separation, and have reliable hands makes up for it. Olave is one of the more underrated and overlooked receivers headed into 2021.

One of my favorite receivers to check out during the summer was Sage Surratt from Wake Forest. Last season Surratt had 1,000 receiving yards and 11 touchdowns. He opted out of the 2020 season to prepare for the NFL Draft. Surratt is a big body receiver that is just a nightmare to cover on contested catches. He excels at throws shown to his back shoulder in the endzone where he can use his size to overwhelm whichever corner is covering him. He lacks an extensive route tree and he has to use his size and physicality to create separation. What makes him valuable is he is the type of guy who is not afraid to take a hit while running through the middle of the field, and he doesn’t drop many passes. Surratt is one of the more underrated receivers in the draft.